Tax Implications and Financial Business Guidance Regarding the Coronavirus

We’re all about continuous learning and growth. Harness the power of your data.

Expanded Employee Retention Credit (ERC) & how our professionals can assist you.

Update on A&E Firms’ PPP Loans and the Implications of the FAR “Credits” Cost Principle: Recommendations to Contractors

The below article has been updated since its original publication on May 21, 2021.

Implications of the FAR “Credits” Cost Principle and Recommendations to Contractors

As companies across the country struggled during the pandemic, many applied for a Paycheck Protection Program (PPP) loan. The goal of the PPP loan was to provide a direct incentive for small businesses to keep their workers on payroll through the pandemic.

Included in this population of companies were architecture and engineering (A&E) firms, many of whom have
flexibly-priced contracts with the government or its prime contractors. When these firms applied for PPP loans, there was uncertainty surrounding how forgiveness would impact federal consultants’ and contractors’ rates, reimbursements and associated cost-type contracts.

While it has been a year since the PPP program started, many questions still remain as to how contractors should treat PPP forgiveness in conjunction with cost-type contracts. Many in the industry are struggling to obtain guidance as to how to factor any loan forgiveness into their overhead rates or project what any rate impact will do to cash-flow or profitability in the future.

Cherry Bekaert has been at the forefront of these conversations with A&E firms and regulators throughout the past year and has established a course of action for our clients based on existing authoritative guidance and the expected challenges ahead.

The interaction between PPP and the Federal Acquisition Regulation (FAR) was addressed on April 17, 2020, when the Department of Defense (DoD) updated its Frequently Asked Questions regarding PPP. DoD’s answer to Question 23 made clear that the Department expected PPP loan forgiveness, based on FAR Part 31, to result in a credit to the government on flexibly priced contracts.

The FAR and its Implications on PPP Loan Forgiveness

FAR 31.201-5 is the “credits” cost principle and states that “the applicable portion of any income, rebate, allowance, or other credit relating to any allowable cost received by a company shall be credited to the government either as a cost reduction or by cash refund.”

On December 20, 2020, the Defense Contract Audit Agency (DCAA) issued guidance to DCAA auditors, which was later revised on January 28, 2021, regarding treatment of FAR 31.201-5 and PPP loan forgiveness. The guidance highlighted the following:

“The PPP loan forgiveness opportunity has introduced a challenge not previously contemplated and ensuring firms are making the right decisions – applying for forgiveness, to which contracts to pursue, to budgeting and forecasting cash-flow from those contracts – requires up-to-date knowledge of the issues and the impact those decisions will have on the business.”

On March 23, 2021, a hearing by the House Committee on Small Business Subcommittee on Contracting and
Infrastructure was held where engineering firms and industry partners expressed concerns regarding Paycheck Protection Program loans. The focus of the hearing shed light on the fact that the FAR credit cost principal could potentially cause detriment to consultants that used PPP funds to keep their businesses going during the pandemic and could not only reduce future billing rates, but could also cause a consultant and contractor to lose more than the loan amount in the case of multi-year contracts.

Susan Moser, leader of Cherry Bekaert’s Government Contracting Industry practice, served as a witness at the hearing and testified before the Subcommittee on the confusion surrounding PPP loan forgiveness as well as the potential financial harm. Watch Susan Moser’s testimony and the entire hearing.

While the impact of PPP loan forgiveness on flexibly-priced contracts has been made clear, the contractor community needs clarity around how to handle forgiven costs under other contract arrangements, as well as contracts with state Departments of Transportation. Application of these credits could negate any benefit received from the PPP loan program, leaving consultants and contractors with questions and concerns.

Industry was concerned that reduced rates resulting from a loan forgiveness would be applied throughout the life of a long-term contract. The available guidance does not address that concern, nor how the credit will be determined or the process to returning to “full rates” after the government receives the loan credit in entirety.

Our Recommendations from the Initial Hearing1

Update: States utilizing true-ups of prior invoiced costs to actual indirect cost rates can apply the indirect rate reflecting PPP credits for purposes of the true-up of 2020 contract costs, if the firm has received forgiveness, or has applied for forgiveness, and such forgiveness is reasonably assured. Contracting firms are responsible for calculating and providing support for the allocation of forgiveness and the related credit to overhead. Firms are also responsible for tracking the recovery and payback of PPP credits to the Federal government. State DOTs are responsible for establishing a process to end the application of the PPP forgiveness credit-adjusted overhead rate once the credit has been fully recovered.

What We Are Doing Today? 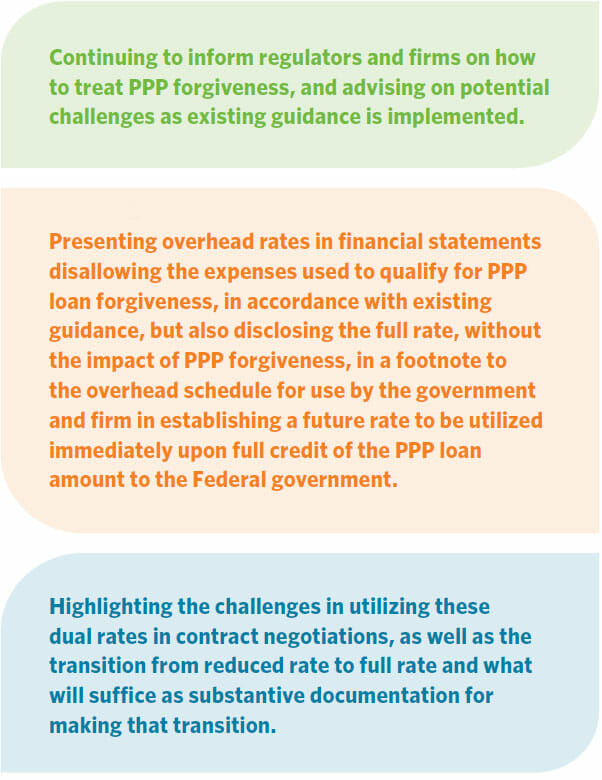 While consensus has been reached and communicated as to how PPP loan forgiveness should impact A&E firm overhead rate calculations, A&E firms should be aware of how the reduced rate is incorporated into current and future contracts, who is responsible for tracking the firm’s accumulated credit, and how the transition back to a full rate upon full crediting of forgiveness to the government will be determined. Cherry Bekaert continues to monitor these conversations with A&E firms and regulators and will provide more information as it becomes available.

Also, if you would like assistance with PPP loan forgiveness or its unique accounting and tax impacts, we have a full cross- disciplinary team that has been focused on these projects since April 2020. Or team is ready to answer questions and guide you through that process as well. For more information, visit our COVID-19 Guidance Center and our PPP LoanServices Guidance Center.

1. The below section has been updated since the article’s original publication in May 2021.