Healthcare Industry M&A Report: What We Saw in 2021 and What’s Ahead

Tax Implications and Financial Business Guidance Regarding the Coronavirus

Expanded Employee Retention Credit (ERC) & how our professionals can assist you.

Ever wonder why popular films like Marvel’s Avengers: Endgame and Black Panther and shows like Netflix’s Ozark and Stranger Things are filmed in Georgia instead of Hollywood? The answer lies heavily in tax credits. For years, Georgia and several other states have offered attractive tax credits and other incentives to entice companies to produce movies, TV shows and video games locally. They have found this to be an effective way to boost local jobs, tourism and other economic activity. Georgia’s film and entertainment tax credit incentives are among the most attractive in the U.S., with companies able to generate credits of up to 30% of their qualified spend in the state with no dollar cap. This has helped Georgia compete for top feature films and led to the establishment of a few major studios in Atlanta for production.

The benefits are not just for film studios. Companies that generate film and entertainment tax credits in Georgia can sell their excess credits to other taxpayers, allowing those taxpayers to cover their state income tax at a discounted rate. Georgia film credits are usually sold through brokers at prices historically ranging from $0.87-0.97 on the dollar, meaning the purchasing taxpayer receives a 3-13% reduction in their state tax liability. By design, the Georgia credit statute provides transfer mechanisms intended to increase the availability of these credit benefits for taxpayers. Recent changes in the law, pandemic shutdowns and other factors have constrained tax credit supply, making Georgia film credits hard to find. Current 2022 credit prices average $0.94-0.97 per dollar of tax credit.

Other states with transferable film tax credits currently include Connecticut, Illinois, Massachusetts, Montana, New Jersey, New Mexico, Pennsylvania and Rhode Island. Credits can be hard to find for buyers in many states due to caps on credits and supply limitations. In states where demand is high and supply for transferable tax credits is low, the seller can minimally discount the credits, resulting in lower tax savings for the buyer.

While film credits get a lot of attention, with billions of credit dollars awarded annually, many state’s tax credits are transferable. These credits tend to be awarded primarily for targeted investments in real estate, jobs, research and development, and alternative energy. The transferability and ability to monetize excess credits tends to substantially boost investment dollars spent. Besides film tax credits, the most common transferable credits offered by many states are historic tax credits and low-income housing tax credits.

There are two general ways that state tax credits can be passed from generating companies to other taxpayers:

While some states allow for the special allocation of tax credits, other states do not or only allow certain credits to be specially allocated. Additionally, an allocation of credits for an investment in a partnership may carry federal tax implications, aside from the state tax savings. Following Virginia Historic Tax Credit Fund 2001 LP v. Commissioner, this type of credit transfer is generally viewed by the courts and tax authorities as a disguised sale of credits, under Internal Revenue Code (IRC) Section 707. At the state level, the North Carolina Department of Revenue recently challenged the ability of investors to receive allocated state tax credit benefits in a partnership structure. This matter is currently under litigation and its outcome is undecided, so pay close attention to a taxpayer’s overall state and federal tax implications. These considerations should avoid risking a short-term state tax savings opportunity, which could balloon into an expensive and time-consuming affair, negating the originally intended benefits.

The federal tax treatment for buyers of purchased credits, whether via a direct transfer mechanism or partnership-disguised sale, is generally the same as the purchase and sale of a capital asset, based on Internal Revenue Services (IRS) Chief Counsel Advice 201147024. The buyer’s tax basis is the credit purchase price, and the deemed sale price is the credit face amount applied on their state tax return. The purchase date begins the holding period for determining whether the gain is long-term or short-term. The deemed sale date is generally the date the buyer’s state tax return is filed, since the credits are applied against the taxpayer’s state tax at this point. Additionally, the conversion of the credit to payment of tax generally results in a deduction for payment of state income taxes.

State tax credit pricing is mainly based on supply and risk. Recapture tends to be the primary risk for buyers of state tax credits. If tax authorities audit and disallow some or all of the credits, the buyer may bear some risk of loss of credits and penalties. This is often mitigated by seller guarantees. In some cases, the state may require certain review procedures before the credits can be claimed. For example, with some conservation credits, the state may require an appraisal review on the value of the donation. Many states have mandatory audit requirements before film credits over certain dollar amounts that can be claimed or sold. This tends to delay the release of credits, but dramatically reduces recapture risk for buyers.

Purchased credits that exceed current-year tax liability for the buyer of nonrefundable credits can result in loss of excess credit amounts. Many state tax credits can be carried forward to future years, but some must be fully utilized within one year. Thoroughly vet and understand the underlying credit being purchased. Credits will often be purchased during the tax year when the taxpayer will not necessarily know what their year-end tax liability will be. Knowing whether a credit must be used in the year of purchase or can be carried forward may be the deciding factor on whether to purchase a tax credit.

In some cases, PTEs may be able to combine both strategies by purchasing transferable tax credits at a discount to apply against business-level state tax under a PTE election, making state income taxes both discounted and deductible outside the SALT cap. However, PTE election rules vary widely by state, with rules still emerging. PTEs should consult their advisors for guidance. 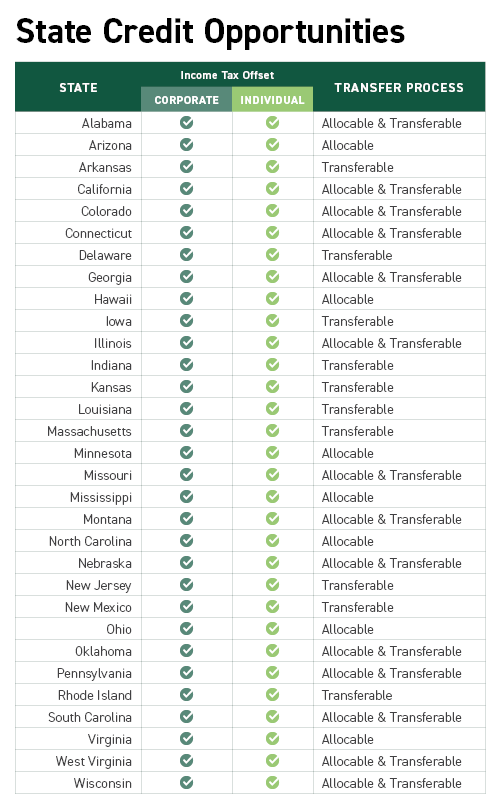 How We Can Help with Transferable Tax Credits

Transferable state tax credits can be valuable tax savings tools, but are not without risks, complexities and unexpected costs (e.g., potential federal tax event). Please contact one of Cherry Bekaert’s experienced State Credits and Incentives professionals with any questions regarding tax credit eligibility.